What is the Lockbar Stabilizer? Knife Technology Explained 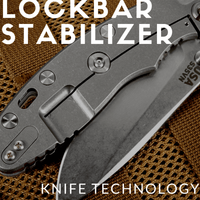 When looking at current tactical knifes in the market, you will notice that some knives feature a lock bar stabilizer--mainly on models like the Strider SNG and SMF, the Rick Hinderer XM-18 models, and Zero Tolerance's lock bar over-extender. What exactly is the lock bar stabilizer (also known as a lock bar over-extension preventer), and how does it work? Here are the facts to this relatively new knife technology.

First developed by world-renowned knifemaker Rick Hinderer, the lock bar stabilizer is an over-travel stop that prevents the lock bar from springing beyond the knife's designed range when using an integral lock bar system (framelock). When a lock bar over travels, the blade fails to lock up, which renders a knife essentially useless. In part, when the lock is disengaged, the spring tension on the lock (which moves behind the blade), can become negatively impacted. Rick has used a variety of materials to make a lockbar stabilizer including stainless steel, titanium, copper and brass. As Rick commented, "while working at an accident scene (as a fireman) I was using one of my Firetacs to cut the upholstery material...my adrenaline was running high and wearing heavy gloves, I pushed the lock bar way to hard thereby springing it. The blade could no longer lock which is not a good thing to happen." From that real world experience, Rick developed the lockbar stabilizer. He mentioned that, "I needed to do something about it. Another issue I wanted to address was the lock bar springing towards the back of the knife when gripping it." The lockbar stabilizer prevents lock failure by negating compression grip force when in hand.

Some other knifemakers have started building in a lockbar stabilizer to the lockbar interface; providing dual purpose functionality. Normally these are small tabs built into the locking steel interface that keep the knife from moving outside the normal range of lock motion. Because they are often on the inside of the frame, they are harder to visually spot when compared to the externally mounted Hinderer-type lockbar stabilizer. Some knifemakers have utilized an over-sized pivot that extends over the lockbar create a stopping barrier to over-travel.

Popular knives with a lockbar stabilizer -

Some popular knives besides the Hinderer XM-18 and XM-24 that have a lock bar stabilizer feature are the Strider SNG and SMF, the Chris Reeve Umnumzaan and the Zero Tolerance 0301 models.