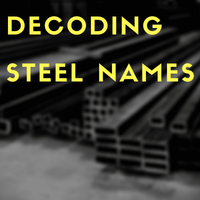 The naming convention for steels can get quite confusing at times. Some are named with a series of letters and numbers, others are named with just numbers. There actually is some degree of order among the chaos.

Listed in this installment are two of the methods used in the classification of steels. One is a system devised by the American Iron and Steel Institute (AISI) in cooperation with the Society of Automotive Engineers (SAE). This system groups tool steels by their purpose or unique properties. The second method, called the Unified Numbering System (UNS) uses a series of 4 to 5 digits to classify steels according to their primary alloying element, the approximate content of the primary alloying element, and the approximate carbon content in hundredths of one percent.

I will apologize in advance to those looking for some rhyme or reason in the naming conventions of various stainless steels such as 440C, 154CM, ATS-34, etc. You won't find it here. This was neither an oversight, nor an intended omission. The fact is that after several hours of research on the Internet, perusal through the books in my library and a couple of phone calls including one to a steel mill, I was unable to get any information providing a correlation between the names of these steels and the group they fall into.

Using this chart we can make some sense out of names like O1, A2, D2, W2, L6, etc. But what about steels like 1084, 1095, 5160, and 52100? Where in the world did they come up with that? These steels are classified under the Unified Numbering System, which in my opinion provides us with more pertinent information as you'll see below.

Let's start with an easy one. With 1084 the first digit tells us that this is a plain carbon steel. The second digit shows that there are no alloying elements. The final two digits show that the steel contains approximately .84 percent carbon. Pretty simple. How about 52100? The first digit shows that the primary alloying element is chromium. The second digit means that there is approximately 2 percent chromium (this is rounded off). The last group of numbers show that the carbon content is roughly 1 percent.

I hope that this information will be useful to you. Please understand that I'm no expert in this area. If any of my observations are technically or grossly inaccurate, please let me know.