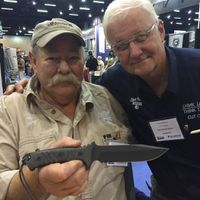 William Bill Harsey Jr. was born in Oregon, 1955. As part of a logging family he spent a large part of his childhood fishing and hunting and he grew up knowing the importance of a great knife. Bill never forgot the significance of a sharp edged tool even when he attended Oregon University, earning his BFA in Fine and Applied Arts. After graduation he followed his passion and began custom knife making one-of-a-kind folding and fixed blades.

However, he is most known for his collaborations with various knife companies. Bill has done much collaboration with Chris Reeve Knives producing such knives as the Green Beret and the Pacific. The Green Beret, known to the U.S. Army Special Forces as the Yarborough, has either a 5.5 or 7 blade. With its durable textured black canvas Micarta handle its a simple, but effective tool.

Another Harsey design is the Chris Reeve Pacific is a 6 clip point blade with a black canvas Micarta handle. The blade has a double row of serrati ons on both sides making it ideal for cutting through fibrous materials.

Then theres his collaboration with Fantoni Knives creating the HB 01 and HB 02. Both are simple folding 4.25 spear point blades. Bill has collaborated with many more and to this day he continues to create and collaborate with other high-end knife companies.