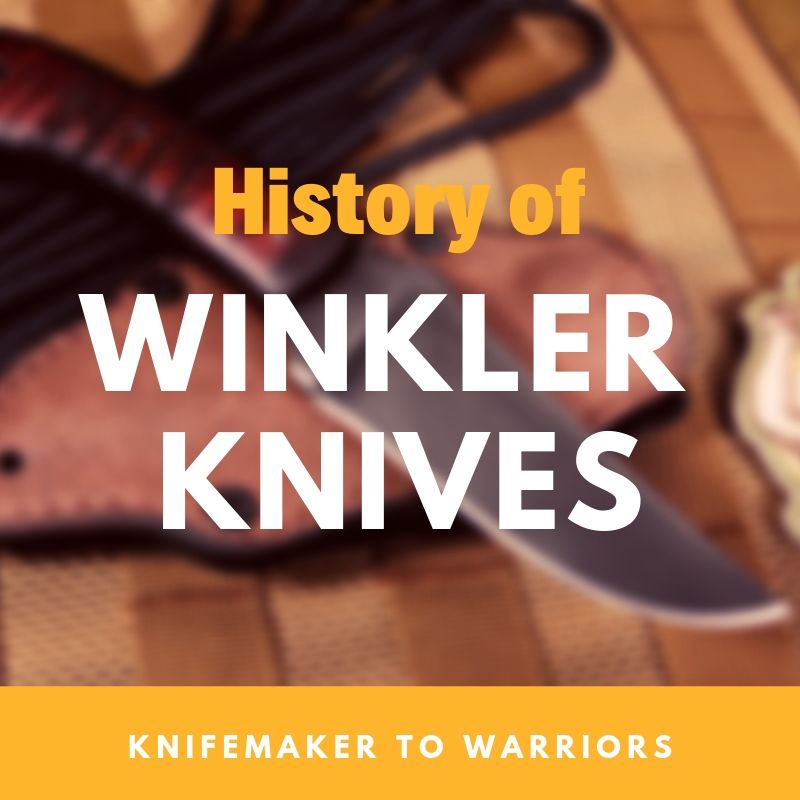 There is a knifemaker from North Carolina, who for the past four decades and counting, has been making dreams a reality.  Master Baldesmith Daniel Winkler has been making knives since 1975, originally for himself in historical re-enactment, he took his eye for historical accuracy and applied it to practicality as part of the kit of an 18th Century woodsman.   Since then, Daniel Winkler has become an icon in the knifemaking world and depending on where you look, you have probably seen his handiwork and not even known it.

His historically accurate weapons have appeared in movies such as The Last of the Mohicans, where blades and tomahawks reflected the hardy yet functional 18th Century weapons of Native American warriors of the colonial Frontier.  Off camera, Winkler Knives provides Knives, Hatchets and Breaching tools to Naval Special Warfare, Army Special Operations and US Air Force Para Jumpers.  These weapons are duty-ready and have even been carried into battle and used to serve the United States in combat.

Working since 1988 with his collaborative partner/wife Karen Shook to create some of the most coveted and sought after blades in the industry, Daniel Winkler has turned made a name for himself among knife enthusiasts. His base of operations is in Boone, North Carolina, not far from where he first started.  His creations are the things of American legend.

A timeline of Daniel Winkler Knives

What makes a Daniel Winkler knife?

Daniel Winkler knives are not your typical tactical knife.  They bear more of a resemblance to a blade carried for everyday work during the Civil War than they do something you would expect a Navy Seal to use. Winkler knives have one resounding characteristic through all of their lines, and that is a form that is simple yet elegant and functional.  From drop points to daggers, serrations or no serrations, Daniel Winkler puts an emphasis on tried and true blade design, notably taken from blades that have served their users for two hundred years or more.  A Winkler Knife might not look much different than a belt knife or skinner a Frontiersman carried, ate, worked, or fought with before there even was the United States.  The advantage comes from incorporating what has worked in the past with materials our forefathers couldn't have imagined.  Micarta handles, which offer durability, weather resistance, and a sure grip in nearly any condition without sacrificing anything for weight.  80CrV2 tool steel which runs the Rockwell hardness scale at around 57-59, offering the sweet spot of toughness and hardness that will accept a lot of punishment without losing its razor sharp edge.

Full tang construction, lanyard holes for a variety of carry options and configurations with paracord, and kydex or leather sheaths.  A range of configurations for a range of blades include skeletonized grips, sculped micarta or wood scales, matte and black finished blades, all revolve around a simpler design hearkening back to a different time.  A time when the bare bones of survival came down to functional reliability and not a bunch of gimmicks.

You'll feel as comfortable with a Winkler Knife at your belt on the river while trout fishing as you would on the battlefield, hunting for insurgents.  These knives are designed to work, to sustain an edge cut after cut, and be ready to use at a moment's notice.

A lifetime of experience

Daniel Winkler has applied what he knows as a Master Bladesmith, historian, and competitive knife user to create these masterpieces.  In collaboration with veteran Operators, such as retired Navy SEAL, Kevin Holland, he has gained insight on what works and what is needed for the perfect tactical blade.  It might look more like something Hawkeye would use, rather than Rambo, but the true test is out in the field, where elite troops have come to rely on the workmanship and reputation of these blades.  A lifetime of working knowledge of bladesmithing and use in the field goes into every Daniel Winkler Knife.  In collaborations with other bladesmiths such as Jason Knight, Daniel Winkler has cemented his reputation as a Master Bladesmith for hard working, functional knives.

As a competitive cutting participant (and winner) Daniel Winkler has been quoted as saying he learned more about blade geometry and heat treating during his years of competing than he did in his previous 20 years of making knives.  How is that for practical application!

Not one to seek fame or attention with competititon, Daniel Winkler has still had his share of contests and came out with the accolades he deserved.  Here are some to list but a few:

When it all comes down to it, Daniel Winkler is a man who discovered his calling early on, to recreate and innovate some of the best tools in the cutlery world.  From the camp kit to the chosen blade of a Special Forces Operator on a night raid, Daniel Winkler Knives provide the same reliability, form, and elegance for any user.  Perfect for gifts, working in the field, or tactical use, these knives are just as stunning in a display case as they are getting down to business.